England beat India by 227 runs in 1st Test at Chennai 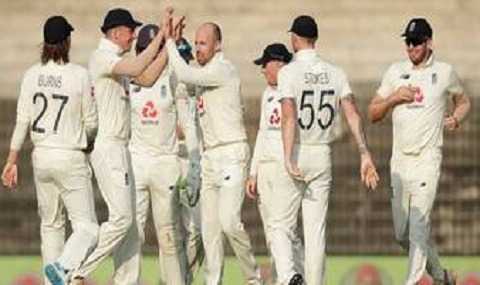 England beat India by 227 runs in the 1st Test after bowling out the home side for 192 Chennai today.

Spinner Jack Leach claimed 4 wickets and paceman James Anderson 3 as England ended India’s hopes of chasing a record 420 to win in the afternoon session of the final day.

England’s captain Joe Root and players of the match in his 100th Test praised his side for dominating the Test match. Skipper Joe Root scored 218 to guide England to 578 in the 1st innings and 40 in their 2nd innings of 179. India hit 337 in their 1st innings.

After the match, Captain Joe Root said, “Yeah, from the toss [things seemed to go our way]. It was a crucial toss, and we posted an excellent score and score 20 wickets in alien conditions…huge credit to the bowlers. The first partnership was crucial to get us going, and from there, it was about contributions. That’s got to be the way we have to win out there – bat for long periods for a time in the first innings,”

“We are a proud team, and it’s important to keep finding ways to get better. The idea was to get to 400 and declare, and it didn’t materialize like that. The most important thing was to take the Indian win out of the equation, and we could focus on taking the wickets. I think the guys handled the pressure well and looking forward to the rest of the series,” he added.

Captain Joe Root also spoke highly of veteran pacer James Anderson for playing a vital role in the team’s victory. “The way he (Anderson) goes about things – always challenging himself at 38 to still get better – he’s a great role model to the rest of the ground. And his skill level is right up there,” he said.

Meanwhile, losing captain, Kohli admitted that England played better cricket throughout the match but backed his team to come back in the upcoming matches.

“England played far more professionally. You need your bowling unit to step up and perform more collectively. It’s okay; lack of execution is understandable. We’re always learning as an aside. Test cricket is a grind. England was ready for the grind and were far more equipped,” said Kohli.