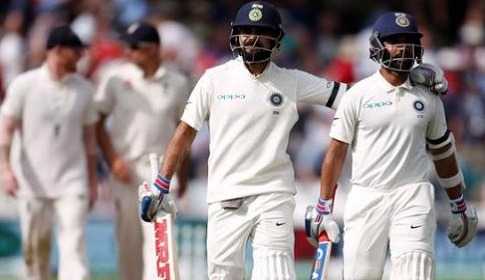 England lost two reviews in the space of 3 overs, hoping to get Washington Sunder out both for lbw shots when he has left the ball alone outside the off stump. The first was nowhere near missing the stump by a long way, but the second was only just over the top of off. that might shift his approach a little bit, making him wary of leaving outside off.

Ben Stokes has been hugely inconsistent in this spell, with too many short balls, but he gets the breakthrough as Pant holds out to Leach in the deep, runnings in off the cover boundary. Pant charges down the ground, but there was enough turn to take it away from the bat, and Pant loses his shape a little. Leach held on to the catch, and India is 6 down, still 154 short of the follow-on mark.

India is halfway to the follow-on target and 6 wickets down. Dom Bess has the best knack that a spinner could ask for, picking up wickets in doubtful ways. Here he dropped too short, providing Pujara the chance to knockback and pull.

Pope turned back at short leg, and the ball hit him on the upper back around the 1st ‘P’ of the name printed on his shirt. It looped up towards mid-wicket, where burn took a simple catch, and England suddenly has 5 wickets in 1st innings.

Root has thrown the ball back to Archer and Anderson, his opening bowlers looking for a breakthrough after tea, and that provides the perfect opportunity to give you a taste of Andrew Miller’s piece on Archer, which will follow later in the day.

It is a pleasing moment that two of the inspiring fast bowlers now playing in the 1st test match in India and on the opposing team as well. But their contrasting but complementary styles, first Jasprit Bumrah and now Jofrah Archer, has demonstrated an enduring truth about high-class fast bowling.

The IPL may be the stage on which both men have honed their crafts, but the pace is a pace with skills that can be unplayable.