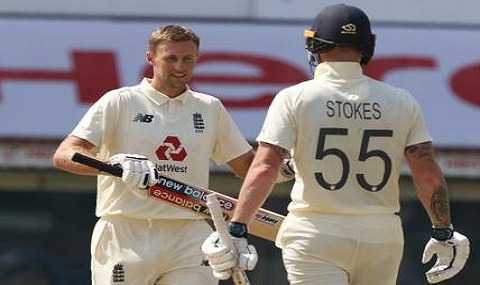 England’s Captain Joe Root an unbeaten 156 runs, and Ben Stokes 63 runs put on 92 runs for the 4th wicket partnership as England reached 355-3 at lunch on day 2 of the 1st test against India.

Captain Joe Root is playing his 100th test, will be joining after lunch stokes, who was 63, not out. England entirely managed the session as Indian bowlers looked deprived of wickets on an unhelpful pitch.

The hosts attacked with their 3 main bowlers, but none of Ravichandran Ashvin(1-92), Ishant Sharma (0-37), or Jasprit Bumrah (2-57) could provide a breakthrough over the day time session.

On day 1, Captain Joe Root became the 9th batsman to score a 100 in his 100th test as England reached 263-3 at stumps after winning the toss. Opener Dominic Sibley scored 87 runs.

England moved past 350 runs in 118th over, shortly before lunch. Both batsmen were completely dominating and did not give a single clear cut chance to the Indian team side.

Joe Root thanked Virat Kohli, who helped Joe Root stretching his leg after the conclusion of the 87th over during the 1st test at the MA Chidambaram stadium in Chennai. “It’s just like a long day, and then after a few overs, I get some fluids and cooled down.” Root said in the press conference on Friday.