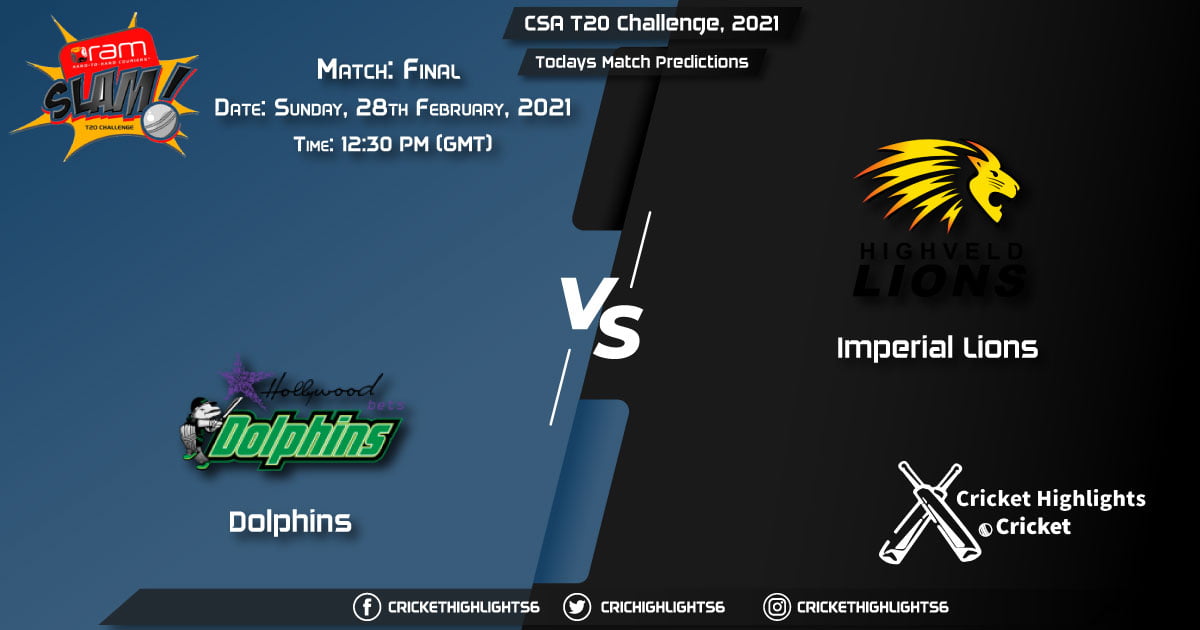 Dolphins will take on Lions in the summit clash of the CSA T20 series. The match will be played at the Kingsmead, Durban, and will begin at 2:30 PM local time.

Lions and Dolphins were the two best teams in the league stages. Dolphins won all their matches, while Lions only loss came against Dolphins. On paper, the Lions are by far a better team, but we’d say both teams are on par in terms of performance. Dolphins have played better than most of us expected. Sarel Erwee, Keegan Petersen, Khaya Zondo, David Miller, all are in top form.

The bowling does not have big names, but they’ve done well, especially Keshav Maharaj. Coming to Lions, if we take out their performance against Dolphins, they’ve been unstoppable, but that was expected, looking at the strength in their team. Batting, bowling, everything looks top quality. The match is expected to be a close game, no doubt, but the Lions are the defending champions, and they have that experience of playing in crunch games. They played a knock-out game yesterday as well and won comfortably. For us, they are marginal favorites.

Star India, Fox Sports (Australia), and Willow TV will broadcast the series in different parts of the world.

Live Streaming: You can watch the live stream of the match on the Hotstar app.

Live Cricket Score: You can watch the live score of the match on Cricket Highlights: DOL vs LIO Final Match, CSA T20 2021

The wicket is on the slower side and timing the ball won’t be easy. Spin bowlers will enjoy bowling on this surface.

The slowness of the wicket might force the captains to bat first.

The weather looks perfect for the day with lots of sunshine.

Dolphins rested Keegan Petersen and Senuran Muthuswami, both of them are expected to be back for the final of the CSA T20 Challenge 2021

Dolphins have been very good in the tournament and have won all their games in the league stages.

We are pretty sure that the Lions are going to play the same 11 they fielded against the Warriors unless there is an injury.

Apart from a hiccup against Dolphins, the Lions have been too class in the tournament.

DOL vs LIO Head to Head

Lions have dominated Dolphins in the CSA T20 league, winning 12 and losing 10 matches. However, Dolphins got the better of them in the last game.

DOL vs LIO Head to Head Stats in T20

Who will win Today Hollywoodbets Dolphins vs Imperial Lions?

The defending champions, the Lions have been dominating the tournament. They are a top team and even though they lost their last match to Dolphins, they are slight favorites to win the match.

For Lions, we will back Reeza Hendricks, Temba Bavuma and Van Der Dussen. Reeza Hendricks played a brilliant knock of 75 against Cobras and looked good in the last game as well while Bavuma has been very consistent. Van Der Dussen is a destructive batsman and can be dangerous in this crunch game.

Keshav Maharaj, Robert Frylink, and S Muthuswami are the top bowlers from Dolphins. Maharaj and Muthuswami will enjoy bowling on this Durban wicket while Frylink has been very consistent with the ball.

Kagiso Rabada, Beuran Hendricks, and Sisanda Magala are the three top bowlers. All of them have been bowling magnificently. Magala will be a real threat on this surface.

With plenty of international stars in their tank, the Lions look like a real force. They have been outstanding in the tournament. Imperial Lions are favorites to win against Hollywoodbets Dolphins.