‘Boss, I have symptoms of COVID-19’ Alex Hales Texted to PSL Team Owner 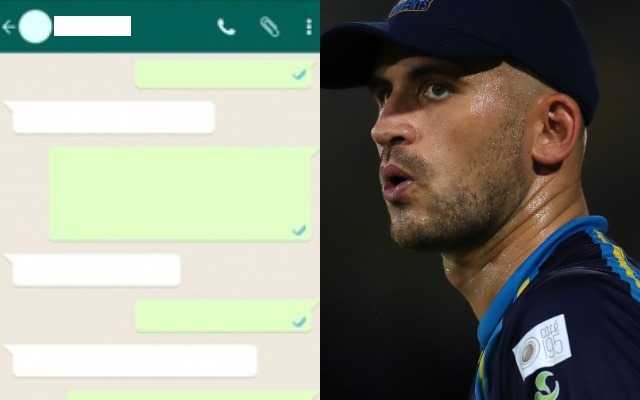 PSL 2020 edition got postponed due to the Coronavirus outbreak. The fifth edition of the T20 tournament was moving in its final phases when the news of Alex Hales having COVID-19 symptoms hit the headlines. The news forced PCB to hold off the tournament, and now Karachi Kings owner Salman Iqbal had come out discussing the same when he got a text from the England international at 2 AM in the early morning.

The entire fifth season of PSL was played in Pakistan for the first time since the tournament originated. Everything was going smooth before the pandemic came into the picture. Many overseas players participated in the league.

Soon, news of Alex Hales, who played for Karachi Kings having the symptoms of COVID-19, hit the spotlight. This ended up being the main reason behind the postponement of the tournament. Now, after a period of a month, Karachi Kings owner Salman Iqbal has briefly discussed what took place at that time.

In an interview, Karachi Kings’ owner said that he got a text from Alex Hales early in the morning at 2 AM. In that message, England cricketer wrote that he had some symptoms of Coronavirus. And everyone in the side should get their check-up done soon before any misery. Afterward, he received a call from Dean Jones, who was the coach of his team, according to Salman.

He added that everyone in the team was in fear. It is something scary that if a player is tested positive, then he has to keep himself in self-isolation until he recovers successfully.

“It was two o’clock in the morning in Pakistan, and we had a message from Alex Hales saying: Boss, I have symptoms of COVID-19, and I think you should all get tested. I then got a call from coach Dean Jones saying he wanted to meet straight away.”

“We were all scared. If you have the symptoms, you have to be isolated. I was trying hard to get somebody to Birmingham to get Hales tested. I even asked if my doctor from London would go to him, but it couldn’t happen,” Salman said.