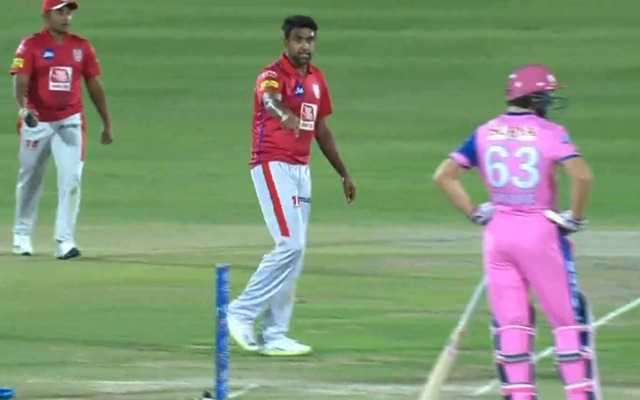 Rajasthan Royals spinner Ish Sodhi and batsman Jos Buttler captivate their fans by doing a video chat on Instagram. During the chat, Sodhi asked the England batsman a question targeted at teasing Jos Buttler. Sodhi pulled Buttler’s leg by asking him about the Mankad incident from last year’s IPL.

The Ashwin and Buttler mankading incident made the headlines in IPL last year as the Indian off-spinner and KXIP Captain mankaded Buttler during a match against Rajasthan Royals.

That’s how the conversation went between the IPL teammates: “Which Rajasthan Royals batsman was dismissed by a Mankad?” Sodhi asked Buttler to which the England star just laughed.

Here’s the conversation between Sodhi and Buttler about Mankading.

Ish Sodhi: Which Rajasthan Royals batsman was dismissed by a Mankad?

Buttler: I don’t know. Is that even a way of deciding dismissal these days?

Sodhi: Shouldn’t be mate. I am with you, Jos, it shouldn’t be, mate.

Ashwin, during his runup, stopped and run out Buttler at the non-striker’s end, who was a few inches ahead of the crease. The Mankad incident had created a stir in the IPL 2019 as it left the cricket world divided into two halves. While some had slammed Ashwin’s act, others came in support of the off-spinner, saying that there was nothing wrong with what he did.

While Buttler stuck to his opinion that it was a wrong decision to give him out, Ashwin had said post the incident that mankading was withing the rules of the game.

“Everybody who knows me, it is clear that I don’t do anything that is illegal. Even my team stood behind me since then. A lot of players have come to me and said whatever I did was right,” Ashwin had stated while defending himself against the criticism that he received.