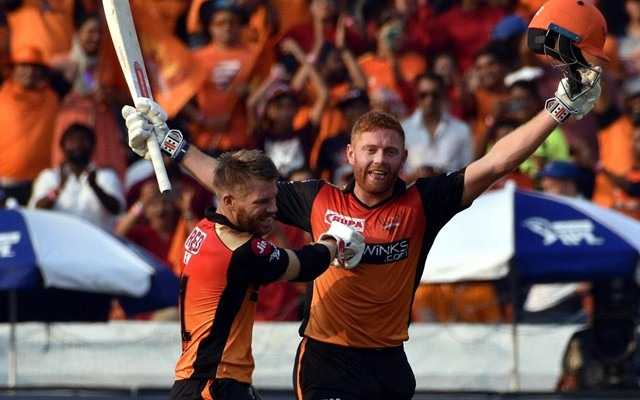 Jonny Bairstow just recently talked about his experience of playing in the IPL and lots of other things. Bairstow opened the innings with David Warner during all the ten matches he played in the IPL 2019.

England wicket-keeper batsman Jonny Bairstow was appearing on a SkySports podcast hosted by former English cricketer Rob Key. The podcast also had former English skippers, Michael Atherton and Nasser Hussain. While speaking about David Warner and the experience of playing with him in the Sunrisers Hyderabad, Bairstow stated that it was fantastic.

“It was an incredible experience I had played against Dave (Warner); however, then playing with him, it was remarkable getting an insight into the way he goes about T20 cricket,” Bairstow during the podcast.

Bairstow went on to applaud Warner and just had good things to say about the Australian opener. “He [Warner] has played that role (of pantomime villain) in international cricket, trying to get under the skin of the opposition, however, going into an environment I’d never been into previously, I couldn’t have asked for much more,” Bairstow stated.

Bairstow opened the innings with David Warner during all the ten matches he played in the IPL2019. The duo was excellent in terms of scoring runs at the top of the order. He has four 100+ stands in the competition, one of which of 185 runs against Royal Challengers Bangalore in Hyderabad.

Jonny Bairstow had a fantastic season with the bat for Sunrisers Hyderabad. In his debut season itself, he scored 445 runs in only ten matches with an average of 55 and a strike rate of 157. He had scored a century and two half-centuries during his stay at the franchise. He was purchased for INR 2.2 crore by the franchise before IPL 2019 and was retained by them.